Best Frontrunner for Calif US Senate

Started this discussion. Last reply by Daezy May 29, 2016. 2 Replies 0 Promotions

Anyone Going to the Pete Stark Townhall Tonight?

Yellow Ribbon From Robyn Talor Thank You! From Susan Nielsen

James Montgomery Flagg, my Grandfather, created the original Uncle Sam "I WANT YOU". Although most researches will refer to JMF as the model of his original Uncle Sam, nothing could be farther from the truth. My Mother tried her adult life to correct this error, and I will carry on this monumental task. In 1916, JMF reluctantly accepted a 4th of July project by Leslie Magazine, and eventually found his Uncle Sam one rainy night on a train bound for Parris Island, on his way to unveil a portrait of the Commandant.

His “symbol of our country” was a young, roughly 17 year old, Marine, which he considered the finest branch of our armed forces. He was able to acquire a 24 hour pass for this “boot” not normally allowed off base, and he aged his model’s adolescent face by forty years and turned a circus clown’s costume into symbolic dignity (as told to me and written by his daughter, my mother, Faith).

This cover was eventually made into a recruiting poster, at the request of the State Dept, and is now recognized as the most famous war poster of our time.

By WWII, JMF had ironically begun to look remarkably like his original Uncle Sam. When FDR is quoted as saying “saving model hire” in a personal letter to JMF, he is referring to the 2nd World War posters. Faith would say, "I thought you might find the facts more fun than the fantasies."

More photos of his other posters and the Fort Knox, KY dedication to him on my JMF Facebook page.

THE SMOKING GUN IN PLAIN SIGHT

What a week this has been.  But not for Fox News, we would not know the depth to which this administration has fallen in deceiving the people they were elected to serve.  If these incidents had taken place under a Republican administration, it makes my blood run cold to think how fast the left would demonize and ultimately “throw the bum out”.

This week, there is a piece in the American Thinker by Herbert Meyer that is a real eye opener.  It has some not well known, but…
Continue 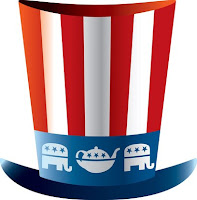 It was a day I will never forget.  After screening, what I thought was, another annoying solicitation phone call, I heard the words, "We're looking for the granddaughter of James Montgomery Flagg for a dedication in his honor at Fort Knox."

It was early spring in 2001, ironically just 3 months before 9-11, and plans were underway for a regal ceremony filled with high ranking military, honor guard, military marching band, a…

Lying has become an art form with Obama. He has been one from the beginning when he promised America, "If you like your doctor, you can keep your doctor".  Last week he told such a whopper, that even the Washington Post gave him …

As we near the Nov-2012 election, more and more Americans are realizing how crucial it is. Help Americans join the crusade to get out the vote by sending a reminder: How's That "Hope & Change" Working for You? sticky notes. Bring your own pad with your written message, or pick up some pre-printed pads at Patriot Depot, join the…

Thanks, Daezy.  Trying to connect with like-minded people.

Thank You!
I just wanted to Thank You for hanging in there with me. I would also like you to know I consider you part of the "Core Group" here on 912 CQ! Thank you for your continued membership Toodles,Suzie
From the Gift Store

heron said…
I think we all agree that to really change the direction of our country, limit spending and limit government, we need to unite the majority vote. We have set up an organization to do that very thing. All patriots should join with us to achieve that end. We do not suggest that you quit other groups or stop other actions ...just that you enlist your vote with ours.
We have a new group site but it is private for the time being. To join you must be invited. You may request an invitation as follows: go to the site www.americanvote.info You will enter on the homepage. Look to the top and select the "contact us" tab and send an email to Paul Lewis following the directions in the comment box. In the subject line please put "INVITE" so that your mail is not deleted as spam. Your invitation must be sent to you from the new site and will come to you as quickly as we can respond. The site you are going to tells who we are and outlines what we are doing. If you have the time you might wish to read it over. Once you are a member of the new site you may invite your friends from the site. Help us take our country back!

right2beararms said…
thanks! We Patriots have to BAND Together!!!

Norma J. Sears commented on Suzie Nielsen's blog post After the Crisis
"Suzie, I was born during WWII and raised by parents who went through the depression.  I have…"
4 minutes ago

Patricia Gillenwater replied to Suzie Nielsen's discussion Your help is needed!
"All 15 counties in Arizona have COVID-19 cases.  There 132 more cases…"
Wednesday

Patricia Gillenwater replied to Suzie Nielsen's discussion Your help is needed!
"Lot's of garlic? Is that to keep people from getting to close :)"
Wednesday

Patricia Gillenwater replied to Suzie Nielsen's discussion Your help is needed!
"We were notified today that there is one confirmed case of the Wuhan Virus in our 55+ park. No…"
Tuesday