The new non-farm payroll job numbers announced this morning shocked everyone and I knew immediately that some in mainstream media (MSM) and blogisphere would do their level best to highlight any bad areas within the report which could be found - because you know it's Obama's evil administration who is to blame.

Yes, sarcasm on my part but that's what is hyped.  That's what sells headlines.  That's what gets people votes and coerces voters into their (political) way of thinking, rather than voters thinking for themselves (because that's a nasty process, they wouldn't lie to me and I just don't have time because I'm busy binging on Dancing With The Stars, Duck Dynasty and Kardashian episodes I missed!).

Sadly for these poo-pooers, there just wasn't any BAD areas in the non-farm payroll report.  Period.  Have fun keeping your head in the sand and drinking the koolaid.

Where the consensus was that that U.S. would add approximately 200k-220k new jobs (btw included in those estimates were seasonal/holiday hiring), instead we got an eye popping 314,000 new jobs in the month of November.

Oh and did I mention, this was WITH a very bad (early) cold snap which left much of the Middle and Eastern U.S. in frigid temperatures and poor Buffalo blanketed with four feet of snow; some people people trapped in their homes the week before Thanksgiving?  Yes and we STILL added over 300k jobs.

In fact folks what they won't point out to you is that the U.S. has had 11 straight months of consecutive job growth, which has not been seen since 1999.......and just think; the year isn't over yet. Underemployment, or workers who have a part time position and are seeking full time status, OR those who are considered "over qualified" for the position they're applying for, is still high BUT improving slowly.  This must continue to drop and it may take unemployment to drop further, maybe to 5% from 5.8% before we see this happen.

As Diane points out in this video, not all of the excuses from employers are more than just that, excuses.  (You believed them?  Oh that's cute)

Now there's really no disputing that the Fed's easy money policies stopped the crisis from worsening, however it also was added greatly to the wealth inequality which had already been slowly taking place the last 30 years..........right before your eyes (and you didn't even know it).  From the Economic Policy Institute:

Wage inequality grew substantially over 1979–2007, lessened in the 2007–2009 downturn, and began expanding again in the 2009–2011 recovery. Trends over the next few years will determine whether wage inequality returns to or exceeds the heights reached in 2007 or 2000—or simply remains far higher than at any time in the 1980s and 1990s. Now I don't know about you, but I know I would have done back flips if my income had increased in this manner.

Instead what most of America has felt is this (below).  No raise or nickel, dime, quarter per hour.  I can hear my old boss now "it's a tough economy right now and we all have to do our part".  All the while he's praying you don't realize they're raking in record corporate profits..........but that's a rant for another day. In my mind there is no disputing the fact that the Fed's quantitative easing program and massive balance sheet expansion, made this recovery different from the one in the 1990's.  As Diane Swonk, Chief Economist at Mesirow Financial said on CNBC this morning:

Unlike the recovery in the 1990's, this recovery lifted the yachts and the row boats were left behind.

Now for those of you who have never taken an Economics class, after an economic downturn or recession in order to recover, companies refinance their debt, reorganize, cut costs, streamline, stabilize balance sheets and begin to create new jobs.  This is typical and exactly what we have been witnessing.  The last thing to recover according to Ed Lazear @ Stanford University at the end of the cycle............is wage growth.

Luckily (and quite coincidentally if you ask me) the plunge in crude oil and gasoline is coming at a perfect time.  While there will most likely be job losses in the energy sector, these will definitely more than offset by the additional cash in American's pockets; which will..........be spent and flow into the economy.

I don't care what anyone tells you.  Corporations don't create the need for jobs.  Consumer spending and demand does.

When is the last time you saw any business over staff and be happy at operating at a loss?  No.  As demand rises, so do sales and with higher demand and sales = the need for more workers.  Consumer spending represents 70% of U.S. GDP.  70%!  Yes, consumer, you control job creation. 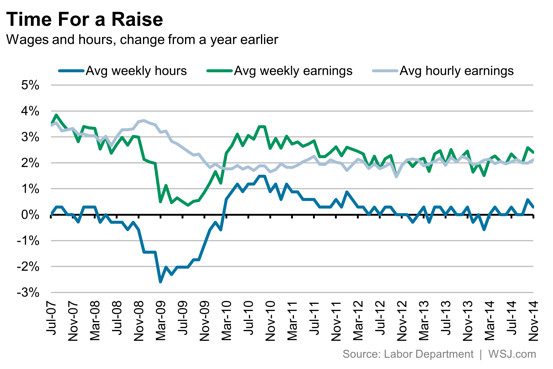 This NFP report may be an anomaly.  Of this there is no doubt.  Next month "this" report could be revised down and we may be back to 220k however this report did revise up the October and September NFP numbers which was encouraging.  Still, we are not "out of the woods" nor does this report indicate a "lift off" of sorts.

Yes, we need to see wage growth now and this report revealed that average hourly earnings grew from 0.1% last report, to 0.4%.  While that may sound meager to most, from an economists perspective, 0.4% represents almost 400,000 which can be created and I don't care who you are, that's a big deal.

It is my hope that lower gasoline costs will spur consumer spending further and then.......wage and job gains.  I can certainly dream.

We still need to see further improvements in earnings and more constant (higher) job gains however this was a stellar report with broad based gains in the labor market; do not believe otherwise.

In my next post I will address the (dreaded) Labor Force Participation rate and why it's not the end of the world.  It's a cycle.  Reverting to the mean, if you will.  Until then yes dear reader, the United States has improved.  We've come a long way from the precipice and we're the cleanest dirty shirt in the world right now with an economy that is growing.  Oh, and those 12 million jobs promised by both candidates in 2008 are definitely within reach.

Kos. Sorry I'm still a sketic and from my years pursuing nuclear information, I found that numbers can say anything they want them to say.  Obamacare is a perfect example.

Kos, Thanks for sharing your professors analogy I can see how it would stick in your head. Jeb Bush took a different approach the other night. He came from the economic model similar to Canada. He did say a little about how we define family relative to immigration and it is different from Canada. Here we let in all, Canada does not. Canada he said had a 75% immigration policy that allows targeted immigration based on the countries economic needs. For Canada that 75% is highly educated professionals. Here it has been a focus on the down trodden invaders.

I was impressed with Mr. Bush's message of real possibilities and hope for America's future. He was not Obama bashing. He also had and shared "real" ideas. That is what makes me believe he will be a candidate and emerge as the front runner.

He is a globalist guy and clearly for better immigration reform.

A comment on immigration which may not be liked by readers BUT may spur some debate or who knows, maybe a post:

This is seriously how my Professor explained it to us:  Imagine the ballast tanks (spenders in the economy) of a submarine where the air is held to keep the ship (the economy) afloat.  As the sub ages, some the ballast tanks (the baby boomers) begin to leak at the seams letting in salt water (they spend less b/c they already have enough crap).  The older they get - the leakier they become; thus more weight at the bottom of the ship and the sub begins to sink (drag on the economy).  You cannot repair them (stimulus programs).  You cannot blow the water out (war & death).  You must replace those ballast tanks (spenders) as difficult and painful as it is (new births or immigration) or the economy sinks and cannot be held up.  Yes, he was very strange but the premise sure stuck in my head.

Now you tell me ONE politician that tells us the way it truly is.  Not a single person.  It's not as if American's would suddenly embrace immigration..........certainly they won't but then Americans might actually begin to realize that politicians are doing nothing more than perpetuating the economy we think/hope is enough to sustain our jobs.  Without new spenders, we will see jobs stagnate or begin to disappear.  I'm not holding my breathe on the GOP really doing anything on the immigration plan other than bellow, back stab and complain.  When it comes down to it, it's simple economics.

Over the last year this and that think tank and others have said America is poised for a great recovery. Yes we are seeing the numbers and it is in my mind astonishing and while not completely all roses it remains positive signs.

I am afraid that my partner and I will not be among the contributors of the spending crowd during the holidays. Not our fundamental style and being on fixed incomes we consider not smart.

As asserted in this editorial we are being  jerked around by pundits. It seems to me that the play between the competing parties on capital hill was who would be the party to get the credit. This to me was the most criminal action/inaction taking place. Now that the GOP has the majority I do believe we will see even more positive recovery as long as the President will not use his veto power.

I do think that it remains true that many do not see the fruits of recovery -- working double part-time jobs. The fuel price dropping while welcomed I believe most know its temporary and honestly believe they know its a contrived situation. We may not have a handle on all the reasons. Slimy bunch doing this manipulation I think. Prices will return to whatever they want them to be and I predict they will begin to raise  in Jan. and by March the chat will be shortages even though none exist.

What I dread most is the added traffic on the roads due in part to lower fuel prices and the additional flows of immigrants.